on a parchment found in eastern zhaoze, it says :
- this zone would be bareable were it not.... -
should probably be bearable !?

caldars gauntlet on a wall it says :
...if these solider slaves attempted ...
soldier maybe !?
only the sky above ...
Top

Sorry - have a bit of a bug in the Revision Module. Every time I try to cast the Breathing Underwater spell the game crashes out with the following error.

Loading save game (The root to the savegame) /Almost Human/Legend of Grimrock 2/autosave.sav
Loading dungeon Isle of the Deranged by Slayer82
Game loaded


Doesn't happen with all the party though. Any ideas?

Loving this revision to one of my favourite modules!
Top

I can't replicate the crash that you are experiencing.
I also can't remember whether I have made changes to the spells, so I'll look into it.

Hello everyone,
just finished my first playthrough (i.e. killed the Examiners). I am currently trying to find all the secrets and treasures.

Those are my current statistics:

Number of secrets found by level:

SpoilerShow
8 Isle of the Deranged
1 Grimwern Woodlands
1 Nomad's Demise - South
I would be grateful if anyone could tell me on which level the missing secret / treasure is; especially regarding the final missing treasure I could also do with some hints regarding their exact location. I dug up a third of Southern Zhaoze (since that ratlings note mentioned it) and still have not found sh*t.

I also cannot find the timepiece, nor have I found any use for the Serpent Staff.

@Slayer82: Thanks for your mod btw. Really enjoyed it.
Top

I'm glad you have had fun playing the mod.

The secrets are difficult to find, so it's tough to know which ones you found to divulge the missing secret.
SpoilerShow
The timepiece is submerged near the ladder in the centre of Grimwern Woodlands (south of where the earthen ogre is).
SpoilerShow
After placing an item or stepping on the three pressure plates in Grimwern Woodlands, there is a secret blocked area near the timepiece, but I'm sure you've found that one.
The only secret I can think of that you may have missed is
SpoilerShow
in Realm of Consciousness Dungeon.
You unlock a secret (via the use of torches) that opens one beach wall in the water/beach area above the dungeon in Realm of Consciousness (south-east). You must also pull the northern lever (hidden by shrubs) in the Realm of Consciousness to open the second wall.
There's a few buried treasures early on and mid-way through the game, but not near the end of the game.
Try the above and see if you can find the missing secret.
Mods - Isle of the Deranged & The Allure of Nightfall
http://grimrock.net/forum/viewtopic.php?f=23&t=9513
viewtopic.php?f=23&t=14762
Top

Hello Slayer82,
thanks, now I got the timepiece and the Sceptre of the Arcane Arts. Did not get a secret for that, though.

Sadly, I already got those secrets in the Grimwern Woodlands and the Realm of Consciousness you described.

Currently, I do not have any secrets at all in these areas:

Perhaps the missing one is in one of these?

Regarding the treasure: As mentioned above, I have found lots (8) of treasures in the Main Beach, and one each in Grimwern Woodlands and Nomad South. I found these via the usual method
SpoilerShow
of looking for empty squares with fireflies at night without using a lightsource.
I have however now searched every map and cannot find any more such places. It especially bugs me that I have that clue that explicitly refers to Southern Zhaoze and have not found anything on there yet (have searched it
SpoilerShow
for fireflies
six times by now). Am I at least on the right track?
Top

SpoilerShow
The fireflies are only used when searching for chests on the main beach, Grimwern, and Nomad's Demise - South.
When a clue states that there is a hidden item, path, or 'secret' it doesn't always mean it counts towards the secrets under statistics.
SpoilerShow
Additionally, there is a switch in the Aelenialen House of Worship that activates a secret below in Maevren's Lair.
There aren't any actual secrets in the other levels you mentioned.
SpoilerShow
Regarding chests, there is a chest in Grimwern Excavation Site that is only accessible via the south-east of Grimwern Woodlands. The trapdoor must remain open, in which you fall down it and find a chest. Once it's closed you miss out on the treasure.
I know that's not what you want to hear, but I did that to encourage multiple playthroughs.
SpoilerShow
The above chest is the one you are missing, because there aren't any chests in the Southern Zhaoze.
I feel bad now. I didn't think about completionism when I made this mod; also, I really did not plan on speedruns, so I don't recommend that.

Fuck. I just realised I
SpoilerShow
moved the chest in Nomad's Demise - South to another location and didn't connect the secret to it.
Sorry, man.
When I was working on both mods, I did them both after long days at work, which means I was pretty tired. I know that's not an excuse, but that's what happened.

I'll try to upload another update, but not for awhile as I am extremely busy nowadays.
So, congratulations on finding ALL of the secrets!

Hello Slayer82,
if you are thinking about making another version, here are some potential bugs / oddities I encountered while playing:

1. The round keyholes which require lockpicks to open sometimes eat up the whole stack (instead of just one). Does not generate an error code or a crash though. Suggestion: If you cannot find why this happens, you could just change the lockpicks to "non-stackable". They would take up more inventory space afterwards, but could not be lost in this way.

2. Killing the Skeleton Legionary in the underground maze in Eastern Zhaoze, x=2, y=11 can cause the game to crash. I suspect this happens when he drops an item that is not properly defined (that would explain why it does not always happen). Game overwrote the error code, so I cannot give you one.

3. Using the "Encyclopedia of Power" always results in a crash. I supect there is a typo or an syntax error in the script which updates the attributes. I have the error code for this:

Thanks for all your help. I actually do have the secret for Maevren's Lair: You get the secret when you push the switch in the Aelenialen House of Worship (this is why it does not appears under "Maevren's Lair" in my list).

4. The Guardians of the Flame in the Olde Scorched Desert will sometimes wander into the building and bump their heads (their graphics are to big). Suggestion: Let the blue force field block the entrance of the building instead of the staircase. This would also make the fight a little bit more challenging.

5. The Crystal of Life in Olde Scorched Desert never recharges once used. However, the one in Greater Grimwern Woodlands (with the inscription "Drained Healing Crystal" next to it) does. Perhaps those two are mixed up?

Regarding the chest, I suppose you mean the chest that has the Shield of the Elements in it. I actually got that one, but that chest was not buried and thus not a treasure, nor did I get a secret for it.

Yeah, I am an obsessive completionist if I find a mod I actually like.

Hello everyone,
for anyone else who is also compulsively hunting secrets and treasures, here are my current maps, with secrets marked using a golden "!", buried treasure chests with a red "X". 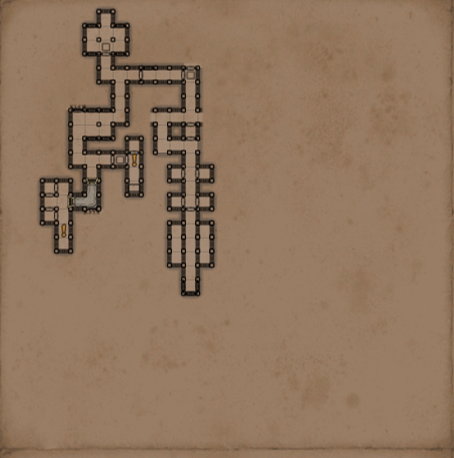 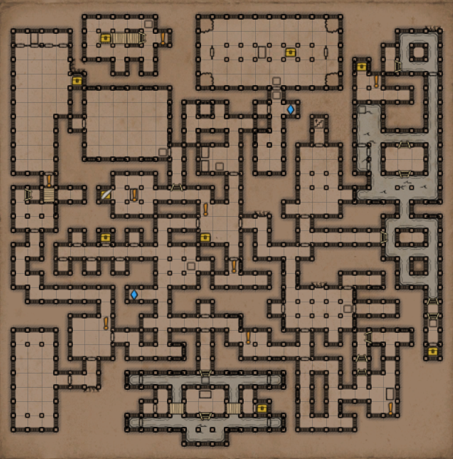 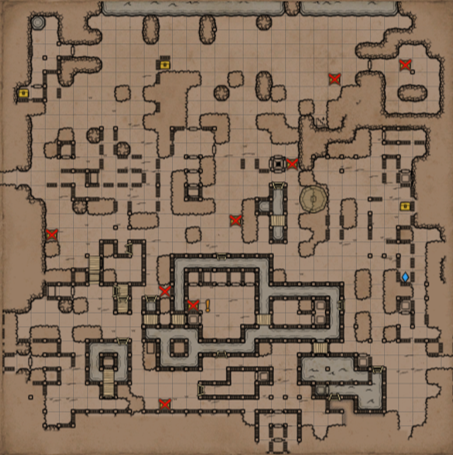 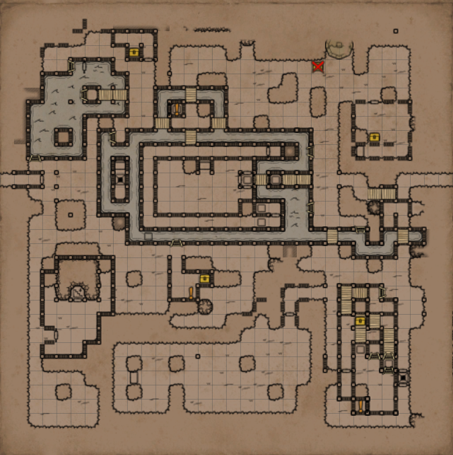 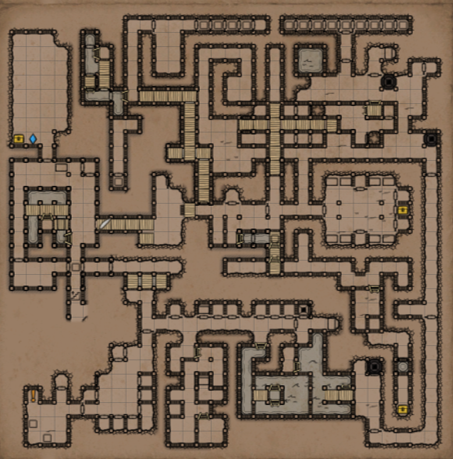 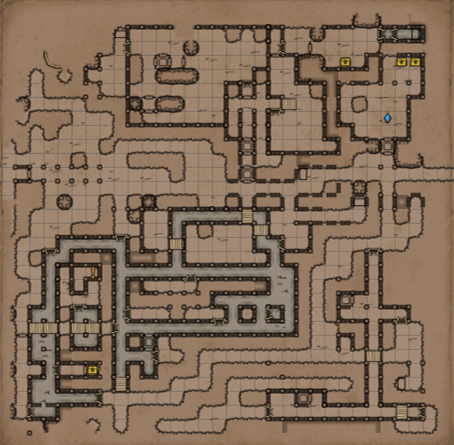 Eastern Zhaoze (2 secrets)
SpoilerShow
Note: Only 1 secret is marked here (forgot to mark the other one when I found it), but there are definitely 2 to be found in this area. 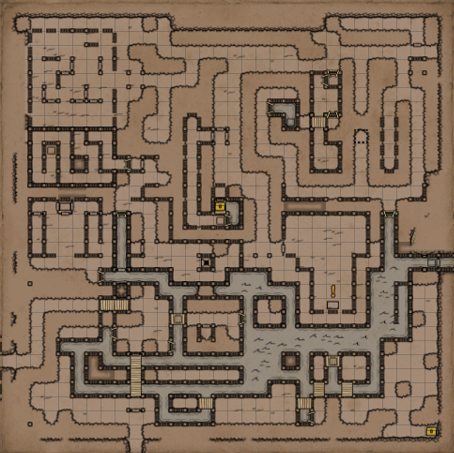 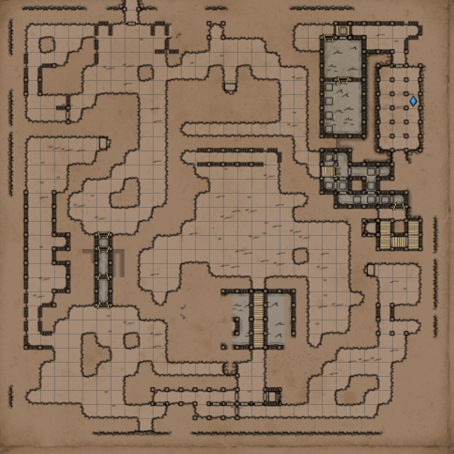 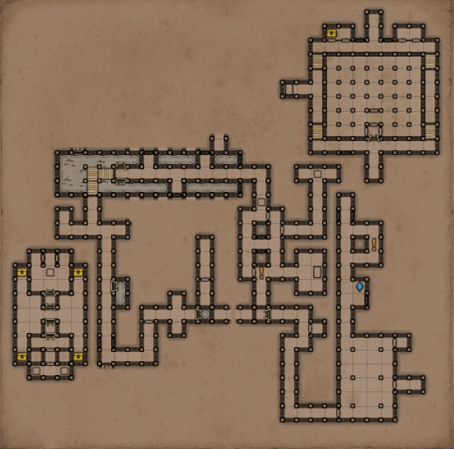 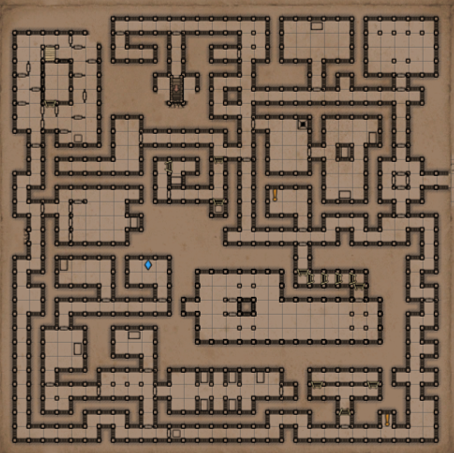 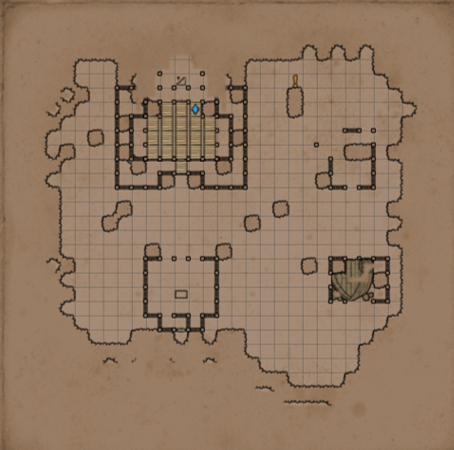 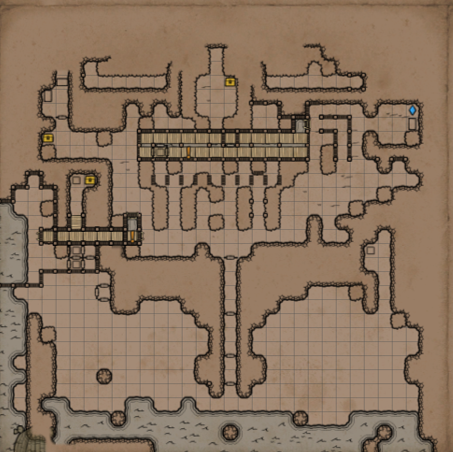 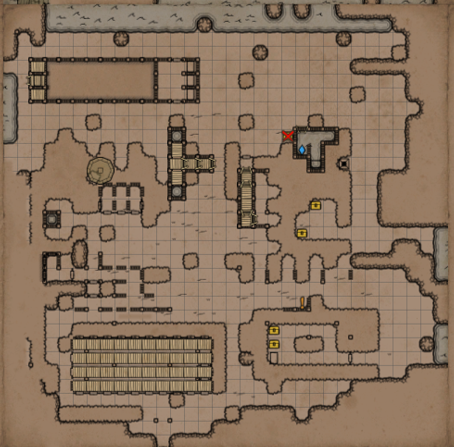 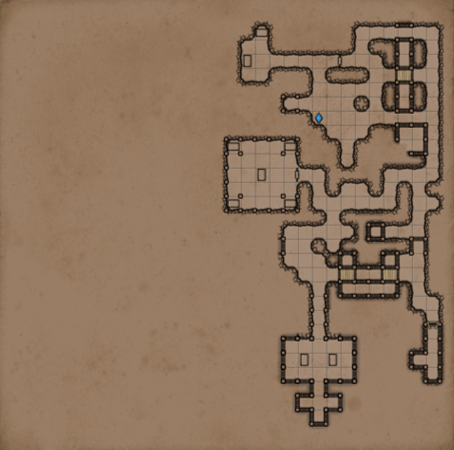 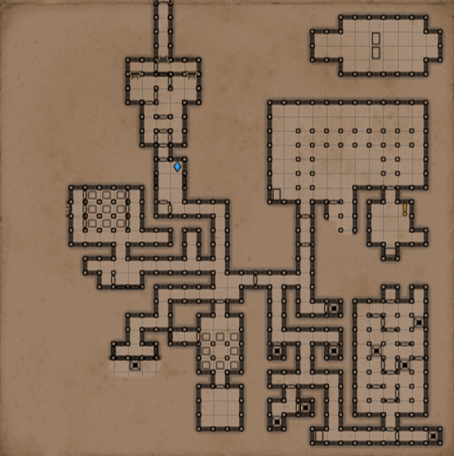 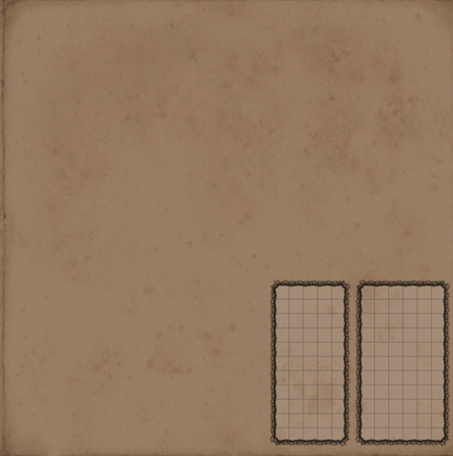 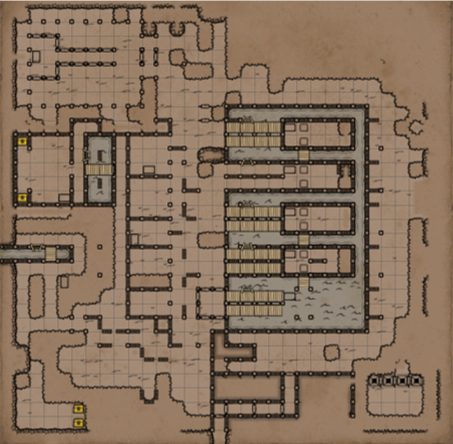 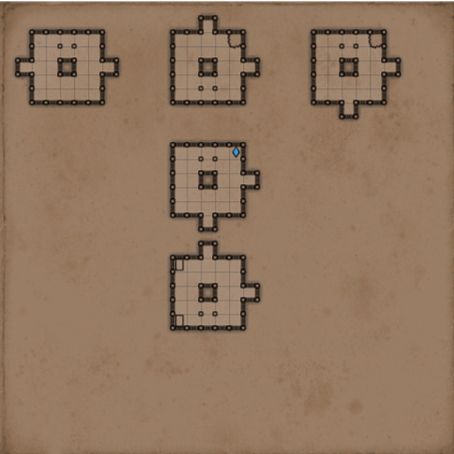 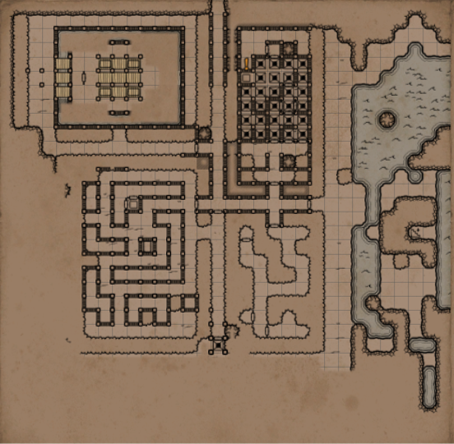 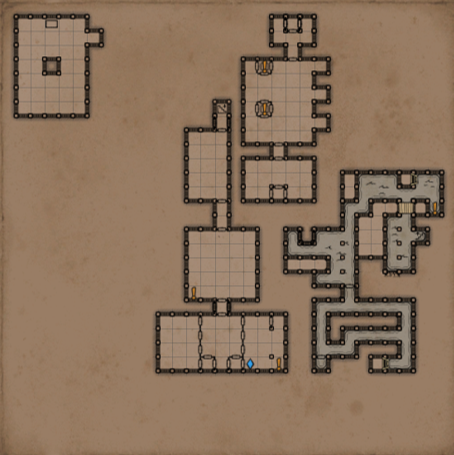 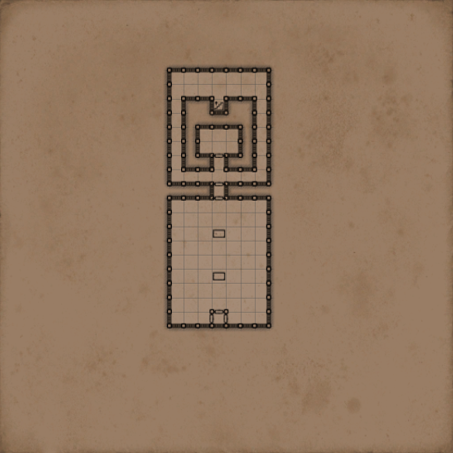 The Path That Few Traverse (no secrets)
SpoilerShow 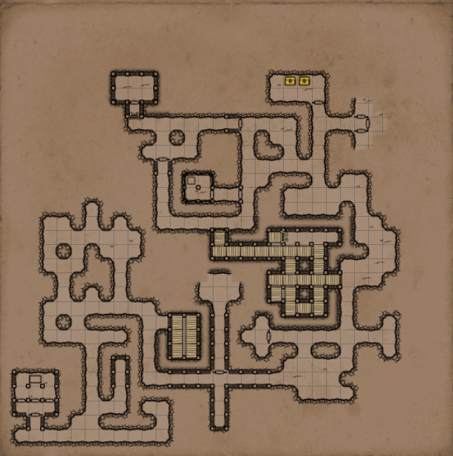 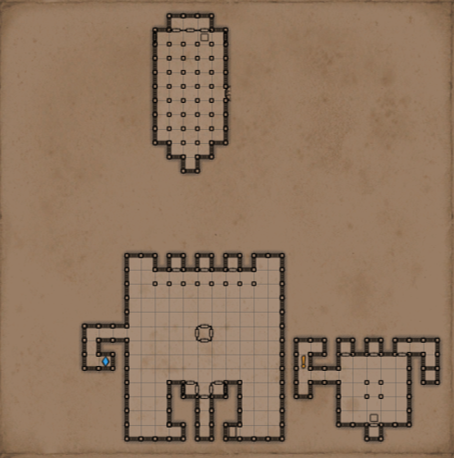