Are you looking for fun Custom Dungeons that you could play or do you want to share your mod with others? Then this forum is for you!
Post Reply
168 posts


What is this place? What is going on in this strange world? What happened to its inhabitants? What do you need to do? And most importantly - who are you?

Open world adventure for a new party.
Recommended difficulty: normal (it is very challenging on "hard"!)
Expected playtime may vary from 30 to 60 hours, depending on goals you try to achieve.

Mod is a "spiritual successor" to the Lost City and is developing many of the ideas used in it. Perhaps you can learn something about Livingrock and who its inhabitants are...

Features:
- Development of your own base (kind of). You can spend resources to unlock new services.
- Mining. Clear the way and get minerals!
- Cooking. Raw meat and fish are not the most tasty and healthy products. Fry them or use them in more complex recipes to create the food of your dreams!
- Trading system (many different sellers and buyers, there is even a bank and casino).
- New spells and alchemical recipes.
- You need to learn spells from scrolls in order to cast them.
- Firearms enhanced: better stats and dexterity bonus to firepower, plently of ammo.
- Crafting items and enchanting equipment.
- Many item sets with different bonuses, collect them all! (All Grimrock sets are now working, plus few new ones created from existing items).
- A mixture of plot and open world.
- Ability to complete the game without completing all plot tasks (you decide when to put an end to your story).
- And of course, many secrets, puzzles and bosses, where do without them?

Known issues and how to avoid them:
* Sometimes the game can crash during the saving. This is a common issue with big mods, and there is 2 known ways to avoid it:
Way 1: (recommended) Patch Grimrock executable file with "4GB patch" tool ( https://ntcore.com/?page_id=371 ). This will allow Grimrock to use additional virtual memory and solve this issue for all the mods.
Way 2: Change texture quality to medium in Grimrock settings. This will solve the issue in most big mods at a cost of some picture quality loss.
* Game crashes when you learn or cast a spell. This issue is common for mods, using custom spells. It can occur if you imported characters from another mod with custom spells/traits. To avoid it just create new party or import characters from another run of "Guardians" mod.
* Warning! Do not play the mod with "Ironman" setting. Due to game mechanic changes, healing crystals will not allow you to save the game. You can emulate ironman, just save only after using the crystal (and train your own willpower)

Tips, hints and recommendations:
- Farmers can cook and mine from beginning while other classes can learn that useful skills only later on. It is a good option to take a farmer with you (for your first run especially).
- Managing items and resources - important part of this mod. Try to use what you have with maximal effectiveness. Strategic errors can lead you to the failed campaign. And this is absolutely normal for this mod

- Magic and alchemy is very powerful tools in this mod, no useless magic schools anymore!
- The farther from the starting location, the stronger the enemies. Explore the world in different directions!
- If a battle or riddle has stopped you - you can always put it off until later and do something else, this is an open world after all!
- Information - one of the most valuable resources (not only in this mod

Pay attention to details, analyze your finds and you will be rewarded!
- It is a good idea to keep some unused skill points of your mage until you get the spell you want to cast.
- Some items and skills changed, pay attention to description!

Credits:
Thanks to Almost Human for great game and editor!
Thanks to content mod authors for great models:
Skuggasveinn - Modular River, Bookshelves, Dead bodies
Mutman - Runebooks
AdrTru - Liquid Potions
Zimber - custom ratling animations
Thanks to minmay for custom items models and icons
Thanks to Dench for testing and suggestions
Thanks to Ukdouble1 and Badgert for russian localisation
Thanks to Alex Diener and Boris (Nofair Fight) for great Lost City lets plays and inspiration they gave me 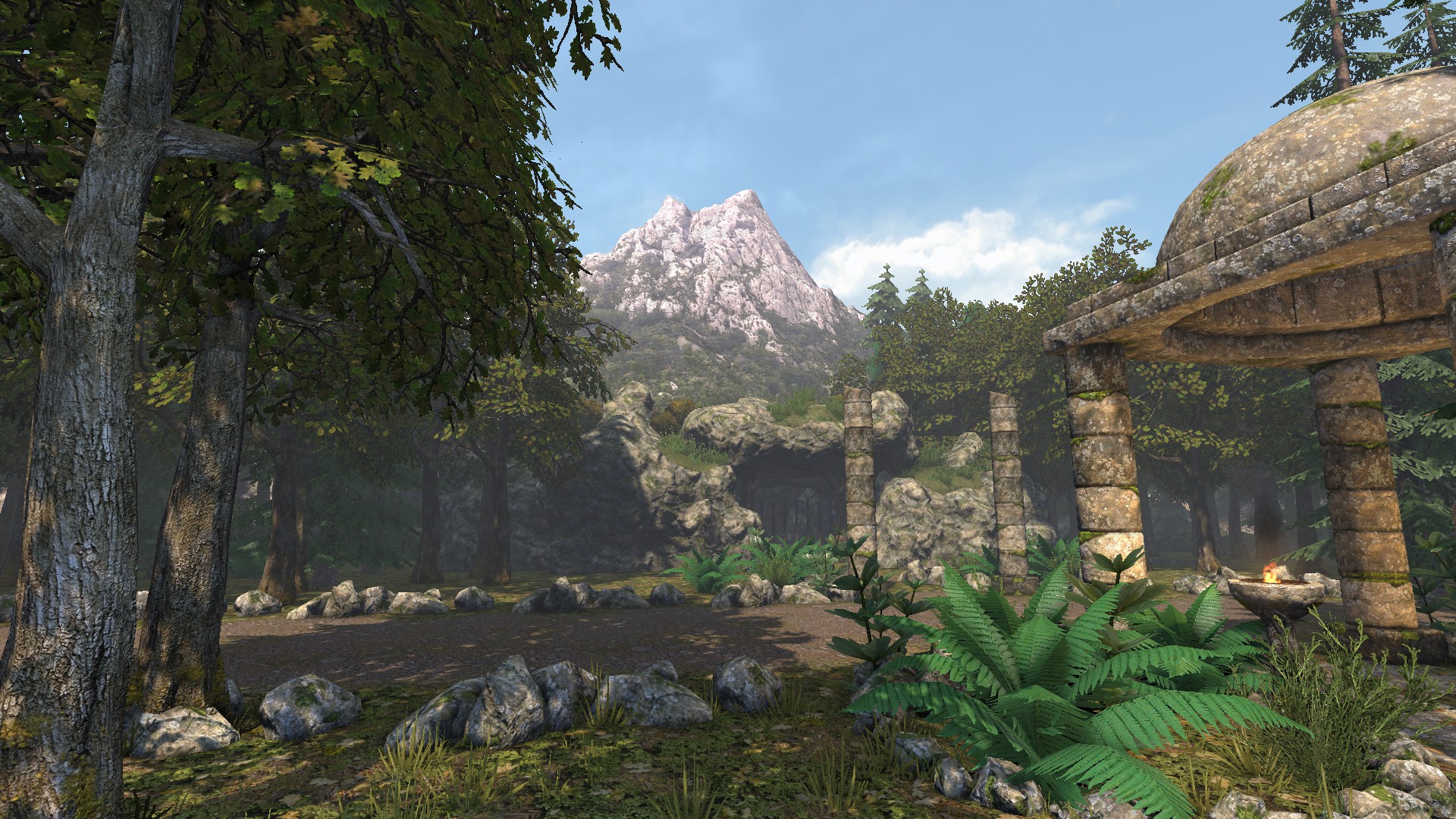 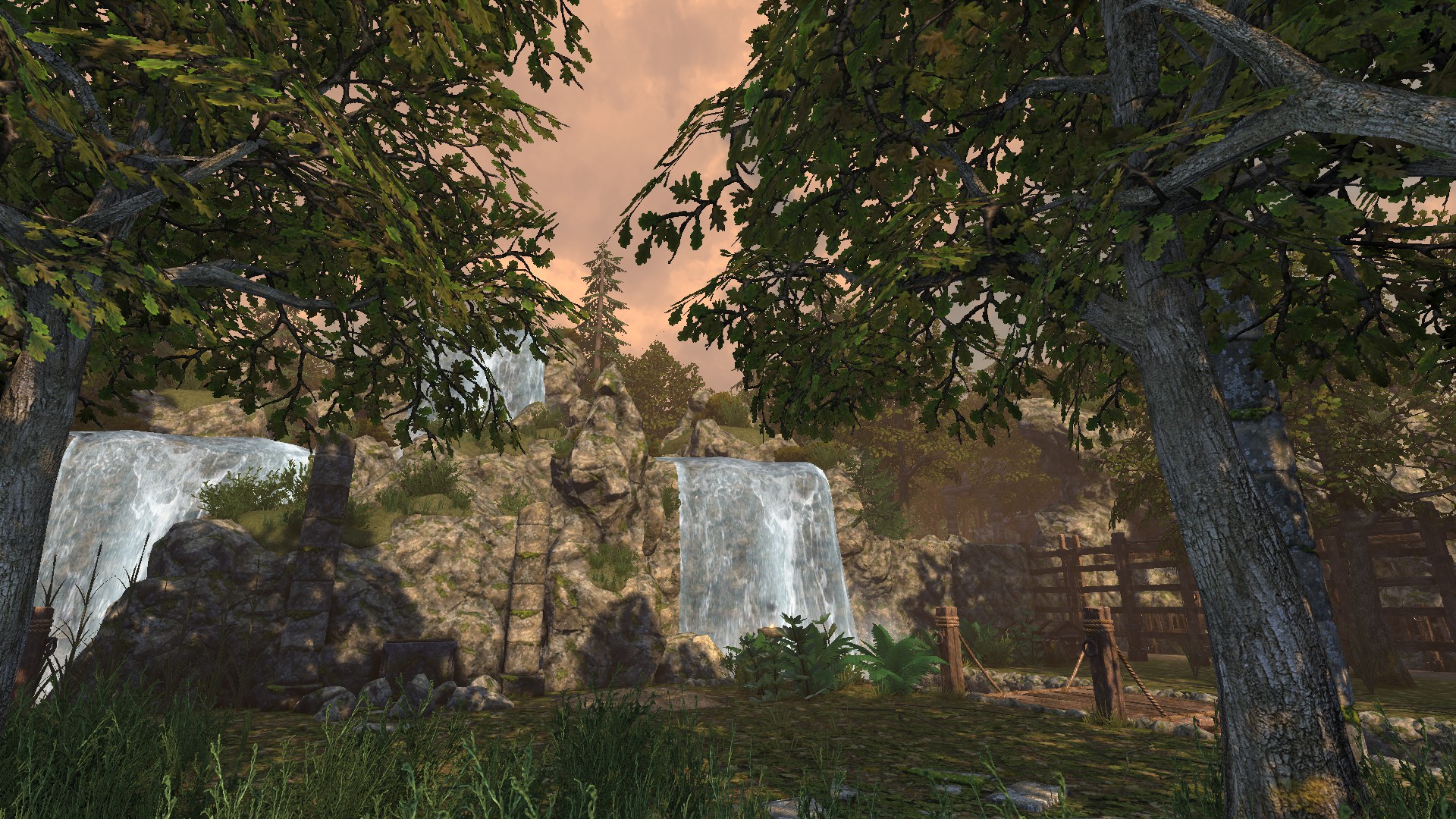 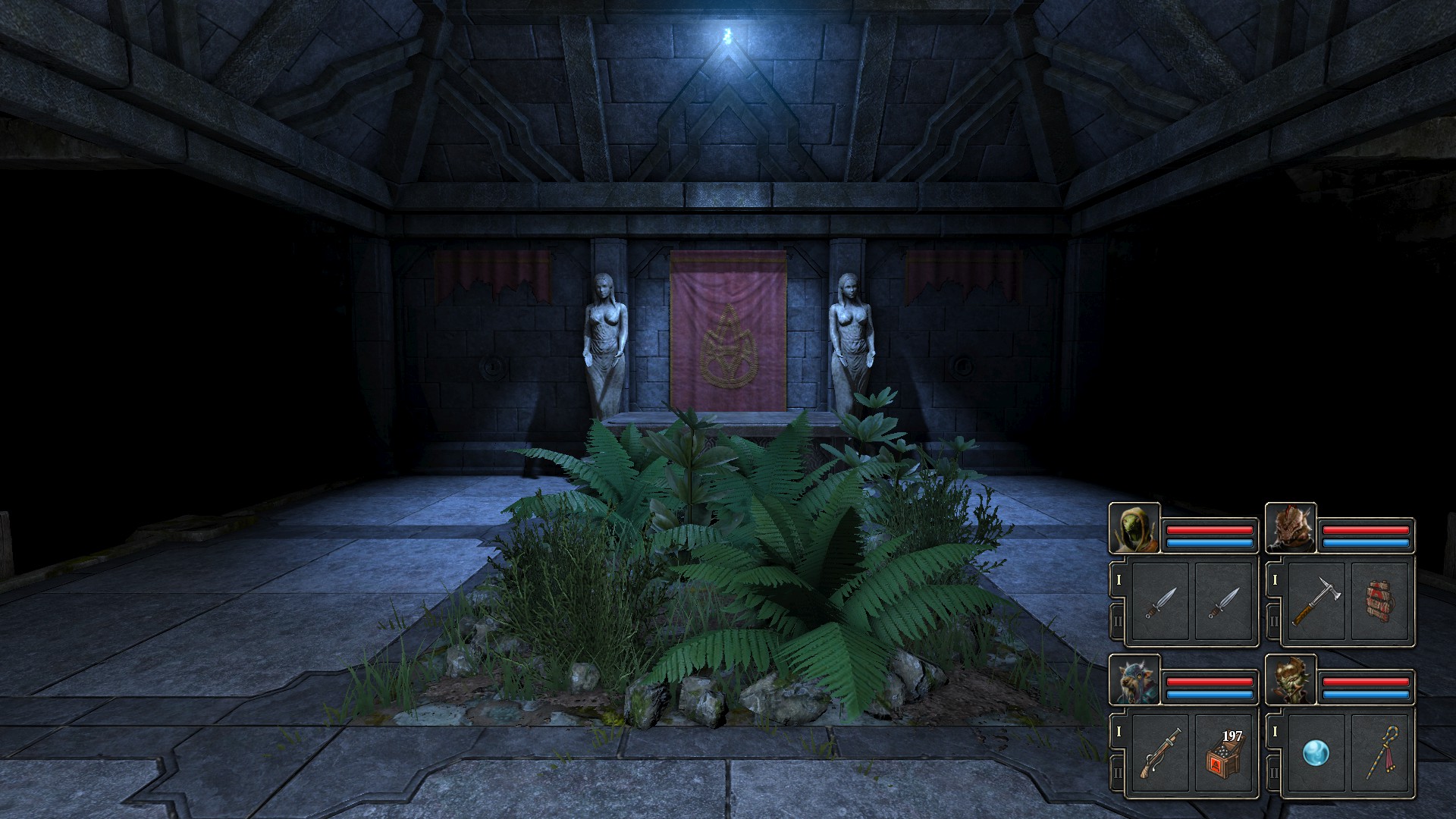 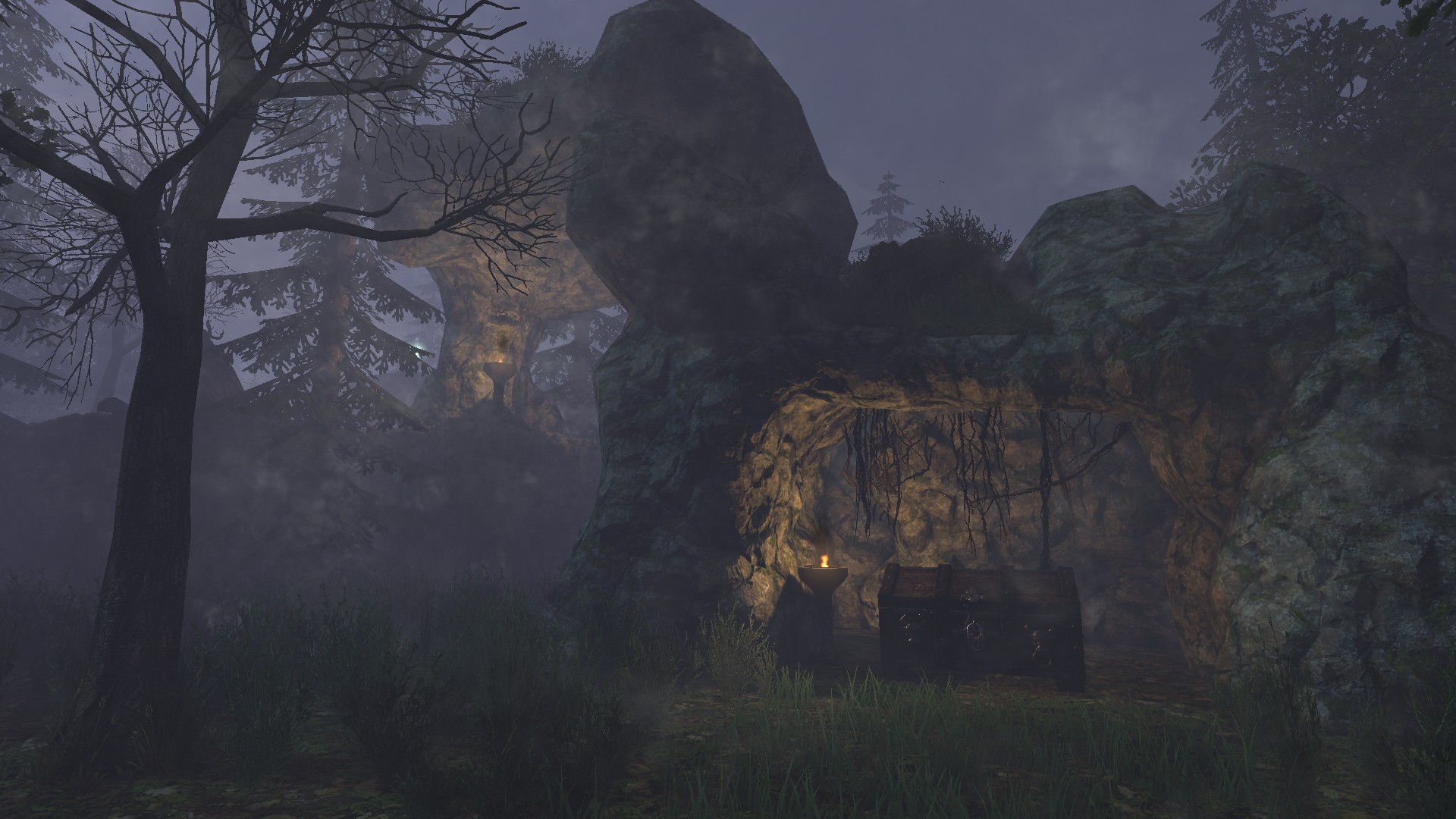 Re: [WIP] The Guardians

That waterfall looks really good, looking forward to trying it out....
Top

Re: [WIP] The Guardians

Beta version of the mod is released on Nexus. If all will go smooth, I will publish it on Steam in few days.
I will be very grateful for any feedback/bugreports/text corrections.
Have a good adventure!

Damn, can't stop playing this one.

3 maps explored so far, but the survival mechanics are spot on.
Top

Thanks for the mod. There's a lot of work put into it and it shows.

I like the way you allow the player to gradually explore without being forced to solve a complex puzzle to continue.
Fights are fair too.

How long have you been working on the mod?
:Edit:

I've been playing for about two hours, but was wondering how you cook food. Is it later in the game?

Without the kitchen you're just wasting away precious raw food that could have been cooked for more nutrition and experience for your farmer.
And starvation means loss of health and dead characters. No farmer cheesing allowed

I'm in 4 hours and still don't have a mortar though! Probably missed it somewhere xD

With every power gem you find you can unlock an extra module in your base. And it's up to you which modules you unlock first.

Even useless junk items like rocks, rags(cloth armor), torches etc... can be used for trade/games/exchange

That's about all the advice I can give so far.
Top

Thanks for feedback, guys! Glad that you like the mod!

About 4 months of leisurely work (evenings and weekends basically).
Have found lots of unpleasant surprises during development

Monsters killing each other in collisions on rough terrain and monsters ignoring direct orders on easy difficulty for example. Still did not fixed the concequences of the last one

Thanks for feedback, guys! Glad that you like the mod

My characters are all hungry most of the time, but the I was able to chip away at the mod, because the fights are fair.
I'm definitely going to get that power gem now. Thanks!
Mods - Isle of the Deranged & The Allure of Nightfall
http://grimrock.net/forum/viewtopic.php?f=23&t=9513
viewtopic.php?f=23&t=14762
Top

On the knowledge I gained so far, it seems like the kitchen and crafting room are probably the most important rooms to unlock first.
So you can buy pickaxes and mine everything. And be most efficient regarding food if you have 1 farmer in your party as recommended in your first run.

But you can unlock anything in any order and that's what's great about this mod.

I love the pressure having to be as efficient as possible in your travels. Since everything is basically universal currency.
Running out of food and starving is not an option in this mod.
Top

8 hours so far. The world opens up slowly

But at least I can still cast light manually.
Top
Post Reply
168 posts