Are you looking for fun Custom Dungeons that you could play or do you want to share your mod with others? Then this forum is for you!
Post Reply
110 posts

Unfortunately I could not play this interesting game. But I was recently asked a question. Look closely at the screenshot below. The questioner asks about the marked strips above the character interface, above the strips of life and energy. 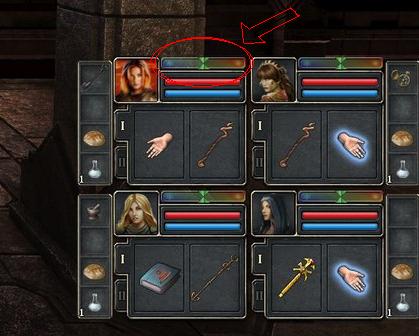 This bar shows the warmth/cold felt by the character. In the current version, it did not really disappear, but it is only shown in the relevant maps: desert, volcanic and snow covered maps. It is hidden in other maps.

If characters fall in extreme cold or warmth on this scale, they take cold or fire damage. They start complaining about it the more they loose health. It can be countered with specific equipment. Warm clothes or armors, torch, fire/ice blades, light clothes, elemental armors, casting spells, standing next to a wall torch, etc, all have an effect on this.
Multiple magic schools spells pack
Grimrock 2 Save Editor
Magic of Grimrock let's play
Top

I downloaded v1.3. Never played Eternal Recurrence before.
I started a new party on Hard.

Level 1 started me in a town, one of the quests was saving a guy on level 2.

Go rescue the guy, and finish the quest. I'm now sitting at roughly 300 Gold only 30 minutes in having only played 1 level.

Now considering that you can buy all these alchemy ingredients for dirt cheap at shops, am I to assume that I can craft a bunch of Skill point potions like in Magic of Grimrock?

Then I figured out, you can just recruit all the others, strip them off their gear and coins and then drop them back off at the inn.
I stopped playing after level 4

It's a great system, but imbalanced and way too easy to abuse.

The current town is just a place to build a Godlike party with 200 + strength bear forms, no cooldown attacks and 1000+ hp/energy if you know what you're doing.
Top

Hey that's not very nice to strip other characters XD
Ok this was a very big update and I'm still fixing things as we speak. I guess a lot a re-balancing is coming soon

I already raised all shop prices by 5 times their previous value. I'll take any suggestion you may have !

Balancing this will be very hard. And even if you manage to balance it out, I doubt it will be fun to play.

Your extensive spell system doesn't require 2 mages, it requires only 1 mage with all schools maxed.
Anyone that hasn't played Magic of Grimrock before will be confused by the mass amount of spells and frustrated how most useful (overpowered) spells are gated behind a 20 skillpoint requirement (5 fire/5 ice/5 light/5 water)

This worked flawless in Magic of Grimrock which I enjoyed on Hard because you gain levels fast there.
2 knights in permanent bear form and 1 battlemage with every single party spell aura activated.
I enjoyed Magic of grimrock and finished it all the way through. It was over the top and partially imbalanced, but with the increased monster difficulty for each character level it stayed challenging and fun, the bosses were all about using the max potential of all the available spells. It was the main campaign on steroïds. And it was a blast.

Eternal Recurrence however at the pure base is not. Your random map generator is amazing, no doubt about that, but it generates bland levels with easy monsters that roll over when you just look at them.
It's not challenging, nor rewarding, no goal.

I'll definitely give all future versions a try.
Top

This mod is like a new game; especially because of the shops and side quests.

I just wish I had more time to play it

Works very nice, look great but are not supposed to feed our characters? When I try, it locks the game up.
Regards,

Are you feeding a farmer?
Which food item are you using?
New party? or imported party?
Top

It could be (I'll check soon...) due to a party prepared with a mod that lets you use dual classes. Just be warned that dual classes won't work in my mods! I've seen it used several times by players, maybe I should do something for it, however I don't think it's really supported by the game engine. In my mods it would definitely trigger an infinite loop between class fixes for the smoothed XP curve.

Also, Pompidom, I don't forget your private message, but I'm very busy at the moment (fixing this mod among other things), so I'll answer you in details later