Are you looking for fun Custom Dungeons that you could play or do you want to share your mod with others? Then this forum is for you!
Post Reply
130 posts

At least, the 4th try was the good one

Awesome mod, very long, didn't expect to be that long actually. The last time i played it (was it the 2nd or 3rd try ?), i was near the end in fact.

Anyway, I enjoyed it a lot but I'm also glad it's finished. Feel like empty now..

Ok, well some though, the Sunken City is a bit too long, even with the underwater spell, it's ok, but's there's nothing special going on there, kind of a routine job i think. There's something there (for me).

The mausoleum is my favorite map, good stress, good traps, good atmosphere, really liked it. I stiil think Necrus is a cheater though

, his guards are are really annoying indeed. For me, the toughest fight in this mod.

I also liked a lot the Troll plateau, plenty good puzzles, very nicely done. The Trolls caves is a good map, so is the Granites caves. I like the fact that you can get in through various places, and then have the possibility to explore a new area. It's great

The pyramid takes very long to complete, maybe misses some more serious fights, but's it's a good map overall. But the riddles are way above my level btw

I found about 80/100 secrets, more (86) but by watching some videos on youtube (thanks to the guy who made them ! You helped me many times

In the tower of Lost Shore, a headstone who says ' ... '
SpoilerShow 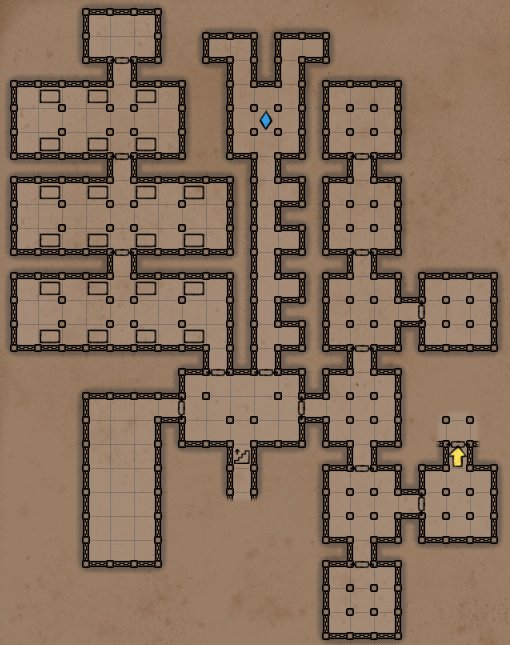 I think i need to put some colored gems but I'm not completly sure.

In the Whispering forest, can't access to this chest, it makes me mad 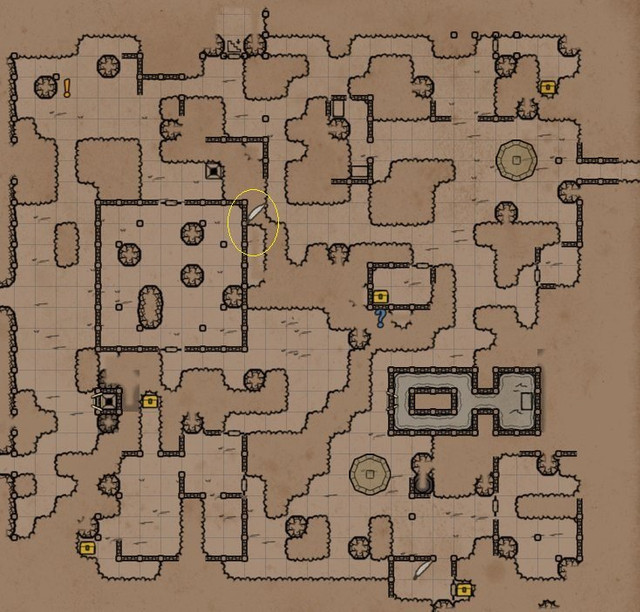 Also in the Whispering forest, a note that says:
I'm lying under the ground
In the forest of quiet voices
Spells of opening ?y over me
But they do not open anything
Didn't found it

Another chest I failed to find:
I saw the trolls buried a bunch of food west ofthe big cave-in.
If I can get to their stash, the scoundrels will die of hunger!
I assume it 's in the Troll plateau map ?

In the Troll plateau (good transition there.. thanks

) , can't get to this part of the map.. Would love to.
SpoilerShow 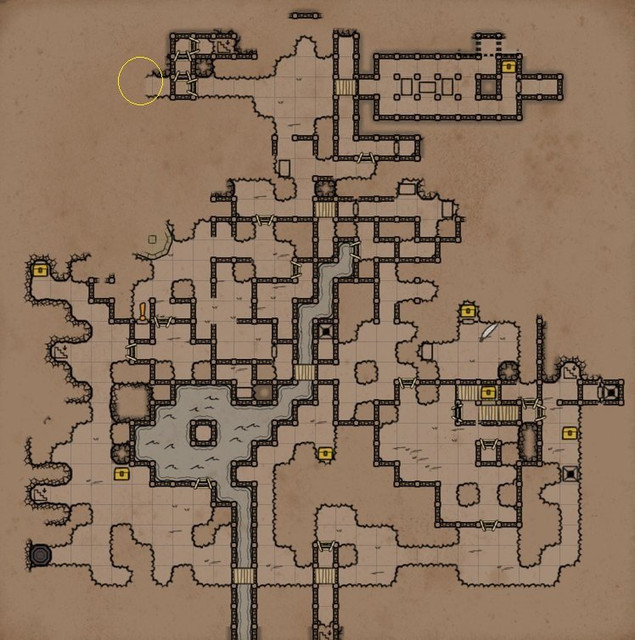 In the Troll caves, this is strange:
SpoilerShow 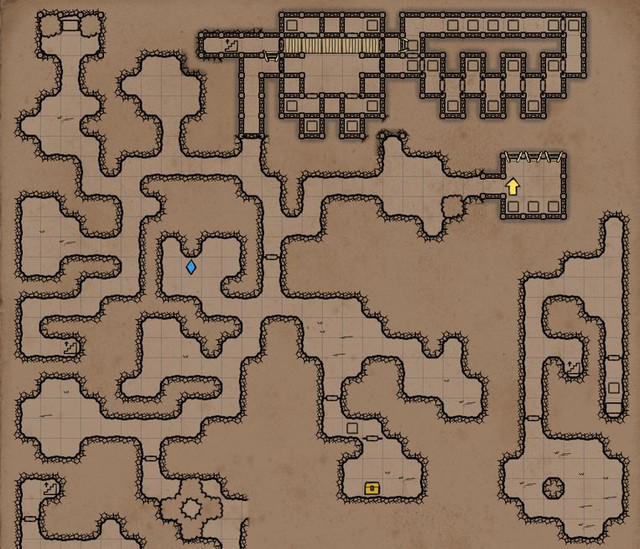 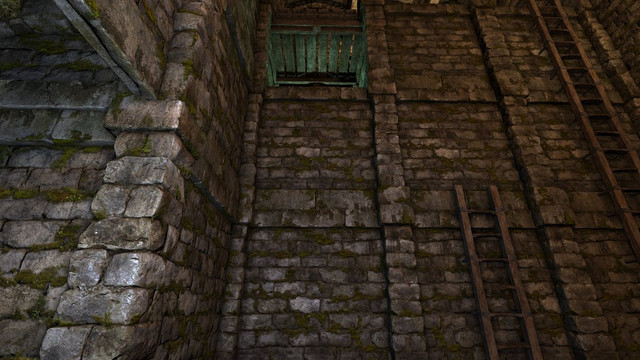 I was able to reach the small room, only by using the ladders. But i'm still wondering what is the purpose of the button at the top, and also the 2 magic things ?
SpoilerShow 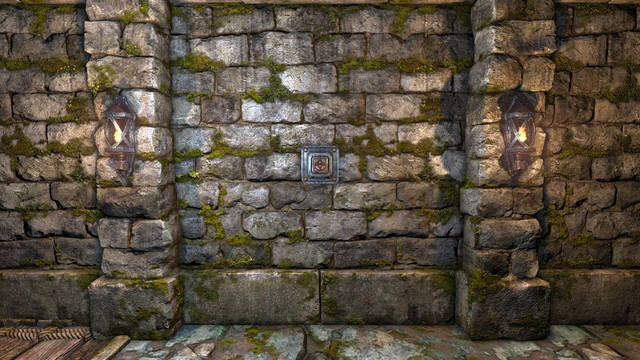 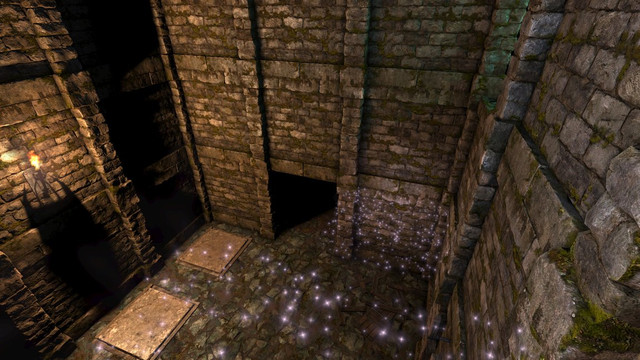 Ah almost forgot. At the top of the dark tower, 'Something glitters down below but you cannot see what it is'. I have no clues at all, there's a pit i think that could help but don't know how to go there.

Well this is it. If anybody can help, that'd be really nice. And tks for this mod again

Thanks Adrageron ! I didn't know about these videos, looks fresh. All secrets found, that's great !

I've watched straight the Necrus part, he basically use the same tactic than me

Funny, the previous uploder did exactly the other way around, casting force fields on Necrus, which buy him some time for the respawning guys.. I actually think it may be a good tactic.

I was thinking about redoing a new game, I think i wiil now

I thoroughly enjoyed this adventure. WELL DONE! The ending cinema was glorious.
Regards,

Hello,im currently playing and seem to be stuck trying to enter the Murklands. I attack the bushes and tribal spear does nothing,like theyre not even there. Anyone else encounter something like this?
Top

Just wanted to say that I'm really enjoying this mod! Just hit 20 hours and I have 66/100 secrets, haven't entered the pyramid yet but I think I'll fully explored all the other levels I have access to, except for the building in the NE of Troll Plateau. Only 1/17 epic items though, maybe I missed some or maybe they are all in the pyramid

I'm excited to see what the the rest of the mod has to offer... maybe I'll write a proper review when I'm done. Not sure if anyone still reads this thread as it's a long time since the last post.
Top

And now, after just short of 30 hours, I have the Elixir of Youth!

83/100 secrets, 11/12 treasures, 14/17 epic items, 23 gold keys. I have the scroll listing the number of secrets by level, but I don't know if I'm really going to go over every level minutely to try to find them all. I haven't yet fought the Infernal or whatever he's called (it would be nice to have the full Meteor armour before doing that, but I'm one piece short), and that's the only thing left I have access to but haven't done. It's been an amazing journey to get this far

Hey, Mikuru! Thank you for feedback! Glad that you like the mod

Don't miss Guardians, it is a spiritual successor of the Lost City

Since you are around, I'll write a proper review, since I don't think giving my stats really counts as "feedback"

I was able to defeat the Infernal, even without full Meteor armour.
SpoilerShow
Since I knew this was the final boss, I spent all my herbs on bear form, speed and rage potions and stood in front of him and spammed attacks and healing. Even though that sounds like a crude strategy, it was still a really tense and exciting encounter, since I had to be constantly aware of what was going on around me to keep up all the actions at the right times. Great final boss!
I am definitely looking forward to trying The Guardians after I finish getting 100% on Lost City. Should I start The Guardians with the party I finished Lost City with? There were so many boosts (power gems, tomes of knowledge, stat potions) thrown at me towards the end of Lost City when I didn't really need them any more that it definitely felt like you were setting me up to have a strong party (depending on how many secrets I found) for the next mod I play.

Detailed review follows:
SpoilerShow
Overall, this is a really strong campaign that feels like a continuation of the main game -- it has just the right balance between combat, exploration and puzzle-solving, and the quality in all three areas is very high. The player is given a great amount of freedom in terms of where to go and what order to tackle problems in, but not so much freedom that it spoils the sense of gradually unlocking harder and harder levels. The gold key shop and quest hub ensure that the whole campaign feels cohesive and there's a great sense of being constantly rewarded for progress.

Among the levels, Sunken City stands out because it dares to do something different. Sure, the base game has Flooded Dungeon, and that also works well -- it's a lovely surprise that the underwater mechanics are used for a little exploration and some puzzles early on, and then you suddenly have an entire underwater level as one of the last levels. But it's very small, whereas Sunken City shows that the mechanic can be used for a full-sized level. My other favourite level was the Mausoleum, and in particular the Torment Halll gauntlet; a very fun and challenging exploration of what the game is capable of throwing at you.

The pyramid is an excellent final dungeon; getting trapped inside with only the resources you currently have with you is a great way to build up tension, and by the time the player is able to get out again, they have a real sense of how much there is still to go and how hard it's going to be.

The gem store is a very neat idea: if the player has fallen behind and had to use up resources, it allows them to recover, while the player who can get by without needing to spend gems is rewarded by being able to spend them on improving their party (either through experience or crystal flowers). My only gripe is that the campaign requires so many lockpicks compared to how many are available in the wild; I never had green gems to spare until reaching the pyramid.

A couple of the puzzles could have used small tweaks -- "purblindness" is such a strange word to use when you could just have said "nearsightedness" -- but there was only really one part of the campaign I didn't enjoy, and that was Dark Tower Floor 3. Normally, I like it when a game requires me to get out the pen and paper and draw my own maps; there is something very satisfying about putting together something physical. It draws me in and makes me an active participant in the puzzle-building-and-solving process, and it gives me something to enjoy looking over afterwards (maybe years later) to remember the fun we shared. But here, all that was diluted by so much frustration, because it was so hard to spot exactly what changes each button had made and get it all mapped out. This could have been made a lot nicer if the buttons had been arranged so that the tiles they affected were always in view.

Despite a few small gripes, this is an absolutely great mod and I really enjoyed playing it

Should I start The Guardians with the party I finished Lost City with?

No, this is not a sequel. Better create a new party. Importing can ruin your experience and even cause some bugs with custom spells.

Wow, that was a great review, thank you!
SpoilerShow
As for "purblindness", this was the only word that google translate proposed, no variants to choose from. While "nearsightedness" sounds much closer to the meaning of the word in my owl language. Will fix it in the new version (not sure when I will release it though