Talk about anything related to Legend of Grimrock 2 here.
Post Reply
132 posts

Dr.Disaster wrote:It amuses me how you pretend to know hardware. Let's see who the actual clueless loudmouth is.

Find and explain the differences shown in these screenshots from my P4.
SpoilerShow 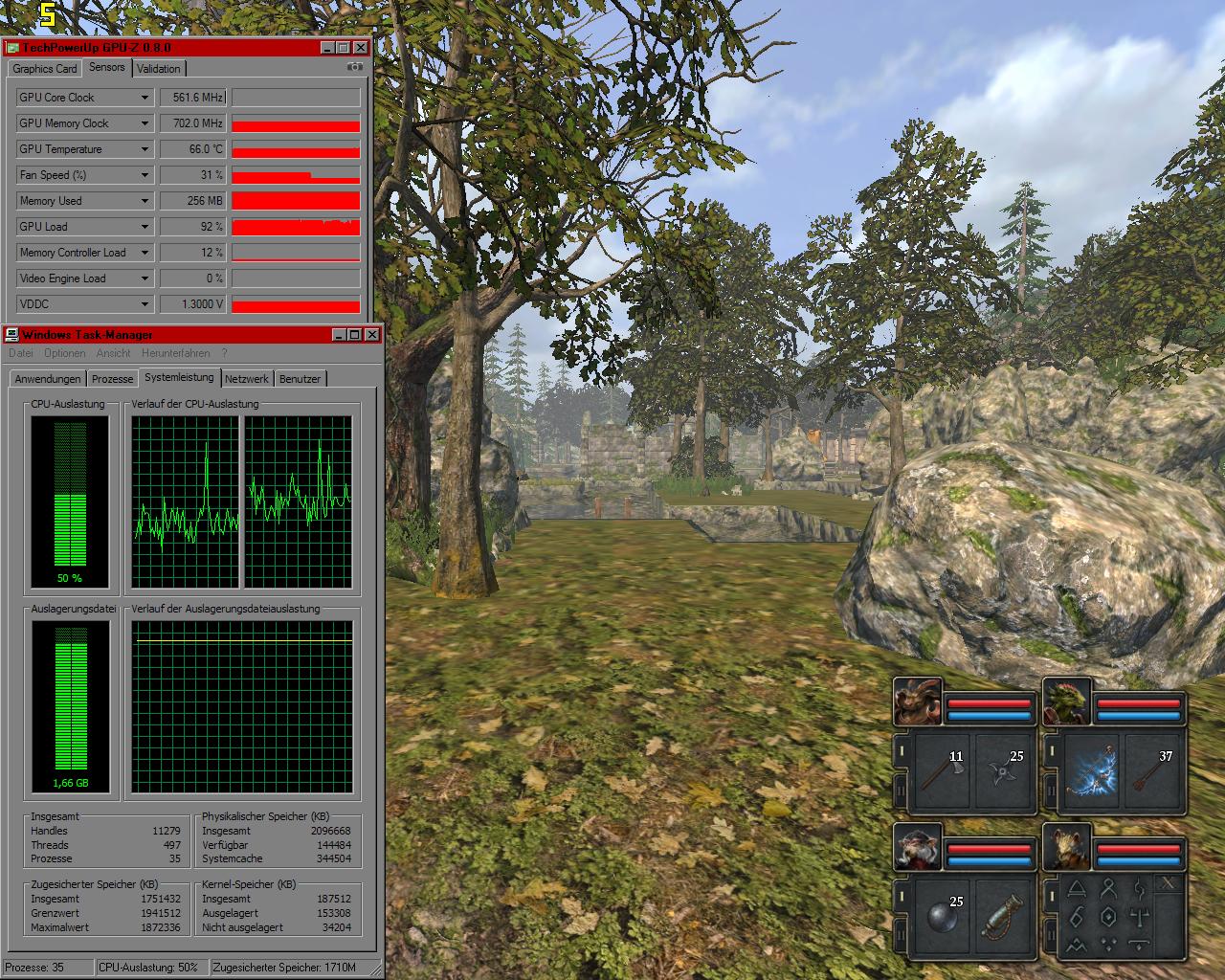 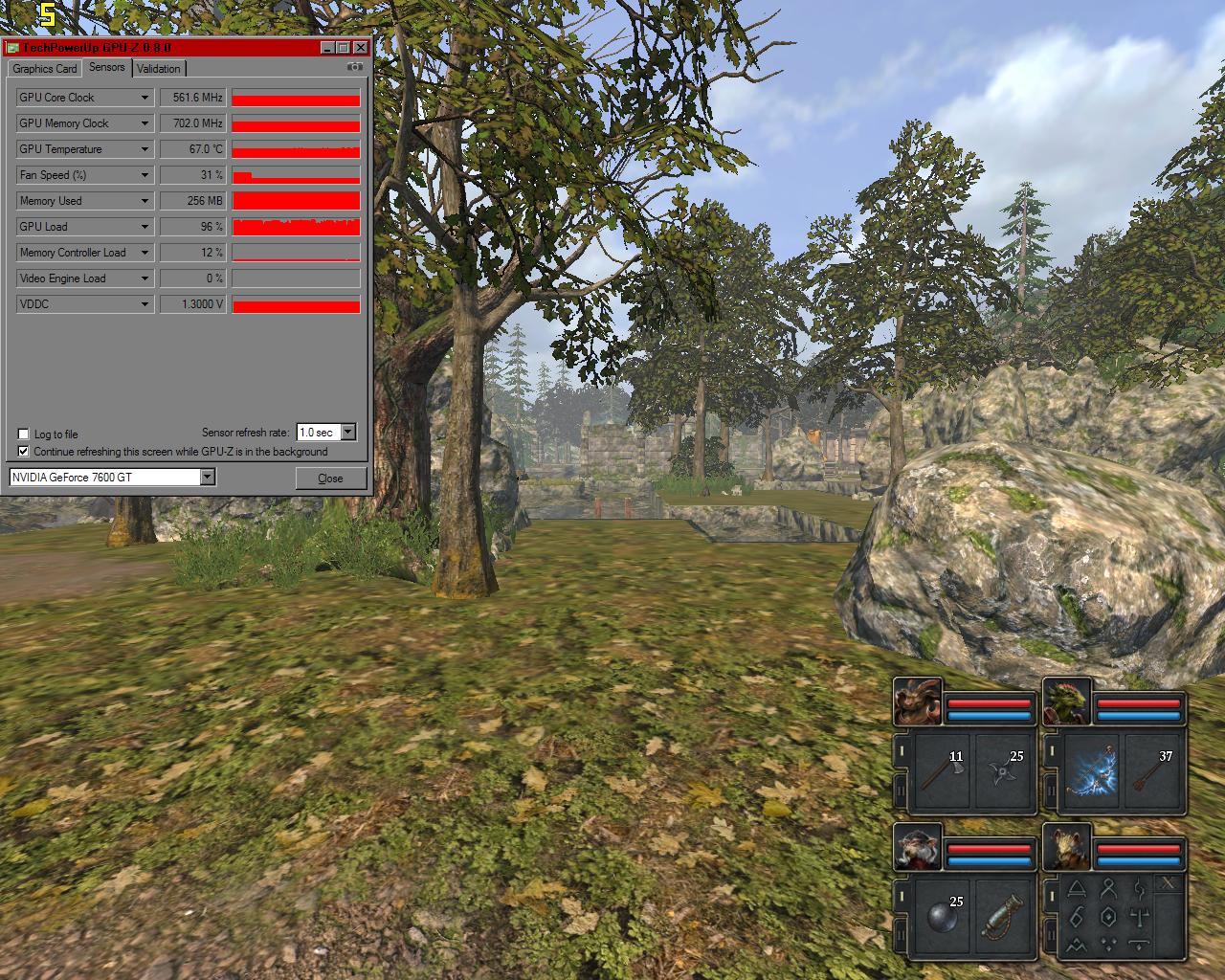 The last screenshot was explicitly made in 1280x720 to match it with Thorham's system.

These screenshots are done in my P4's default resolution 1280x1024.
All other LoG2 GFX options are identical: borderless window, low render, high textures.


badhabit wrote:Then you pinned Log2 to CPU0 only and nothing changed?

Both cores are in use for both screenshots.


badhabit wrote:Or you played with down or overclocking the CPU?

I would need to enter the BIOS to do that including a reboot but the GPU-Z graphs show there was none.


badhabit wrote:You shut down your browser who had eaten 50% CPU cycles?

My P4's 2 GB RAM are not enough memory to run a browser and LoG2 at the same time.
No program was started or stopped between both screenshots.
Top

Taem wrote:***FINAL COMMENTS: And the rapier not being dex based is ridiculous! Have you ever used one IRL? They are used for fencing, which requires finesse and guile over brute strength. Minor nit really.

The modern fencing foil is a descendant of the rapier, but it's one designed for modern (nonlethal) sport, not renaissance-era spilling of blood in the streets. An actual battle-worthy rapier of the latter sort is a different weapon and would not be used in the same way (unless you wanted to get yourself killed).

Ah hah! Now that's something I didn't know; thanks for sharing

Taem wrote:RE: Firearms... everyone agrees... you, me, everyone... that they need modification. I see Anti posted in this thread twice, yet didn't bother comment on this. Not unexpected. Shows to me their [GGG's] main interest is of course the bottom-line this time around, same as it was with LG1, meaning they will fix it in LG3 but not LG2. I'm sorry, but to me that's just sloppy modding that I can't respect - fix up the old game for the fans then move on!

During beta Phitt, petri and me already had a bit of talk about firearms damage and ammo and i've not given up hope yet that they will see a bit of love. We'll have to wait and see.


Taem wrote:RE: Special attacks/Cool-downs... You are correct that I haven't made it very far into this game yet. I was under the impression from some when I made this comment that some special attacks require over two seconds to activate. In DM and Ishar: Legend of Fortress, your one single toon had his attack icons greyed out as he recovered from his special attack and the better the special attack, the longer the cool down, but there wasn't also a "warm-up" period. The point here is if these rumors are true of 2-3 second special attack warm-ups, that seems quite off to me because I know with a min/maxer party with dex-based attackers up front and bomb throwers in the rear, you could get off a good 2-4 attacks per second, so in 3-seconds time the DPS you'd be missing out on comparatively to a single special attack would obviously overshadow the special attack completely. However I cannot speak on this from experience at all, so I'd rather not make any more comments on it until I see some of these special attacks with long warm-up periods myself. But seriously, the concept of a warm-up seems redundant when you already suffer a cool-down - that and I don't like the idea of tying up my mouse click for that long when I could be quaffing a healing potion or doing other things in that time. Do way with warm-ups I say and just increase the cool-down to balance out! Oh, and regarding cool-downs, I don't think I ever complained about them before since I've always viewed the cool-down as a necessary staple of all RPG mechanics used to balance skills, so I'm not sure where our wires got crossed on that one.

Well back then it was theory since we had nothing to work on and right now i'm ok with their workings. You are right that for straight dps they might not be that interesting but their intention are strategic attacks. The preparation phase of most specials takes 2 seconds with a few being even shorter and the phase can be influenced by class choice (Fighter). The post cooldown depends on the power of the attack and it can be influenced by skill/trait/gear.

Among the few short prep phases is the regular dagger's special attack "Throw": it's build up takes 10 energy and about 1 second. This would also be my suggestion for all items with Charges: let them consume a moderate amount of energy (like 10) plus give them a shortend prep-phase. This would make them far more accepted.


Taem wrote:RE: Spell damage... to me, it's not so much the damage itself that needs tweaking from what I understand, but I prefer the dmg tied to a stat to give it more variety in its damage output and less static. When spells are consistently doing the same damage based on how many points are in their level and the spell level is already maxed out, the motivation to keep playing is diminished and on top of that, I feel like I'm playing Super Smash Bros where everyone does the same damage all the time. I say, find a way to tie in Willpower attribute points to damage like it was with GR1, like how melee and thrown weapons, and missile work with Strength and Dexterity respectively. From your comments, I'm lead to believe you think I was complaining about the system itself, which I don't remember specifically mentioning in my balance issue post. To be perfectly honest, I much preferred the spell system in Dungeon Master over any other game like this I've played; LG2's system seems to cartoonish to me, like I'm playing on a child's LEAPFROG educational iPad connecting dots to "make stuff happen".

In both LoG1 and LoG2 spell damage has a certain range and it is influenced by skill level. On possible stat influences Neutronium Dragon came up with an interesting idea; you might want to check it out.

Of course the spell system of DM gives direct influence to damage. This requires a more complex input and i doubt people would like to choose both damage level and spell in the midst of battle. In addition with monsters growing more and stronger during play casting lower level spells - when possible - seems a rather poor method to conserve mana/energy while a potion can quickly solve any shortage.
Top

Since the main campaign has 2 tribal spears i have to report this unbreakable stacking bug.

How to reproduce:
- equip each spear on a character
- toss the spear placed on the higher numbered character
- let auto-pickup do it's work

Bug report: a petrified character can drink a potion of resurrection, but it has no effect (remains petrified).
Grimrock 1 dungeon
Grimrock 2 resources
I no longer answer scripting questions in private messages. Please ask in a forum topic or this Discord server.
Top

Petrified is not dead. Use Antidote to get them back into the action.
Top

The correct question would be : can other living characters do it as well?
Top

The correct question would be : can other living characters do it as well?

You mean: drink a potion of resurrection without being dead?
You are right: they can't thus petrified characters should also not be able too. Seems like an inconsistancy.

Yet you need to consider that both dead and petrified characters can't drink a potion on their on, because they are .. well .. incapazitated. So other party members "force" those potions onto/into them.

In addition: petrifications is somewhere in between paralyzed and dead. During my solo run it happend once or twice that i got petrified which caused an immediate "Game Over". A paralyze does not have that effect.
Top

If resurrection isn't supposed to cure petrification, then the game shouldn't let petrified characters drink it.

It seems reasonable to me that it should cure petrification since petrification is identical to death in every other respect, though.
Grimrock 1 dungeon
Grimrock 2 resources
I no longer answer scripting questions in private messages. Please ask in a forum topic or this Discord server.
Top


Or they can just drink whatever is a liquid and if it cures it then it cures it, if it doesn't then it doesn't. You know, kinda like real life?


Right, because being so scared you can't move your muscles (petrified) is the similar to being dead and having no blood flow and total loss of internal organ functions (death).

In other news, having the common cold is similar to AIDS so drinking NyQuil should cure them both.