[MOD] The Curse of Gothmog 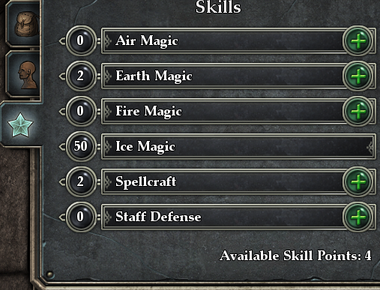 There is no Ice Magic in this mod.
The skill is maxed on purpose during game start to prevent players from sinking points into something completely useless.
Top

Ah ok.. thanks for the tip. Is it mentionned somewhere ? Didn't seem to see anything about that in the intro (obviously i could miss it).

Dear comunity,
First, thanks to Lexdr, your mod is amazing, well-balanced, and intrigatingly frightening (on some hot spots..).
I am really enjoying it, and the add-ons compared to the original and other mods I've tried so far makes it really one step beyond...

So thanks to you, to Germanny for the previous work, and all the community who played and support who are still struggling into the dungeon...

Short introduction, I am about to get my feet wet, fleeing from the library after fetching a few scrolls
SpoilerShow
(is the tough guy always respawning?)
, and get confronted to an existencial question : Where the hell did I missed the lock picks?
I am pretty sure it would be useful to fetch the chest behind the grate on the big room full of elementals on level 12.
I am pretty frustated to have missed it, I enjoyed the idea of lockpicking in precedent games (fallout New Vegas, EOB, Krondor, U7, etc..), and I don't want to be unable to open other doors further on.

Also, I found so far 37/75 secrets (feel like it's not thaaat good...), 9h45 well spent in the treacherous dungeon, and have the feeling I had the feeling I hadn't missed much so far (that was before seeing my stats...).