gotta love auto correction! I guess that could be a latrine square you can GRAB it here

you make me really happy. Love it. Now it is 100% what I needed. And it lloks very nice at all (simple but perfect)

I've never heard of that game, but it looks really cool. Looking forward to this modern edition of what is apparently an old classic.
Top

Hi, while I go littlebit into manipulating the default 3d-objects of the game for my needs (like I promised) I also thought littlebit about the logic-side of the mod.

However two things I would change, if it is accecible by you (the player). Thisfor I wanna ask for your opinion.

One matter is that the original game supports creating food by a spell. Well this is to easy and not really challenging in my opinion. Since the Game already has an very nice outdoor-area wich in form of a Forest, I would prefer to give the player some hunting-places, with respawning creatures for dropping food. Since the Forest-Tile of Skuggasveinn looks really very nice, i think it would be a reason for the player from time to time to visit again the wonderful outdoor areas (instead of clearing and then having no reason to enter again the forests, unless for traviling between the several Dungeons)

The second matter is, that the original game has attached a village between the several outdoor areas. But the villages wasnt more than a junction of the ways and for selling and buying items.
I would make it so, that the player can exchange the dropped crap what the player dont needs (like the many shields and spears of the skelettons

) against food and maybe heal and energy potions at this places.

Take a look at the outdoor Area of AP2 which is 2x2 in size of a normal dungeonlevel (spoiler!):
AP2-Worldmap

This is the whole outdoor-area (Forest n River) of AP2.
And I think this would be really nice Hunting-Grounds of some sort, rather than only beeing a walkway to the dungeons.
And do you see this little huts in the mittle of the map (wich also are the border of the 4 outdoor areas of AP2) ?
This are the ingame-villages which acts like Stairs or Teleporters between the Areas (well and as shops in the original game).
I would make item-exchange places there(for food i.e)

How does this sound? Is it accesible for you as player? (instead of giving a spell for create food anywhere)

I dont have any pictures but try this for fire.

I created some particles systems that looks like exactly to be what you are looking for.
You the have to copy the code and place it in your mod_assets scripts

In you materials scripts
SpoilerShow

And this in your objects scripts
SpoilerShow

You will have a new object called fire_emitter

This should do the trick
The Lurker
Top

Wow, thank you, this will do very well.
I was about to make something like this, for the firefields, now I will try out what you postet imediatly.
Thanks again.
My first LoG-Mod: Abandoned Places 2
Top

This looks so amzing like it meant to be i dont know what to say. 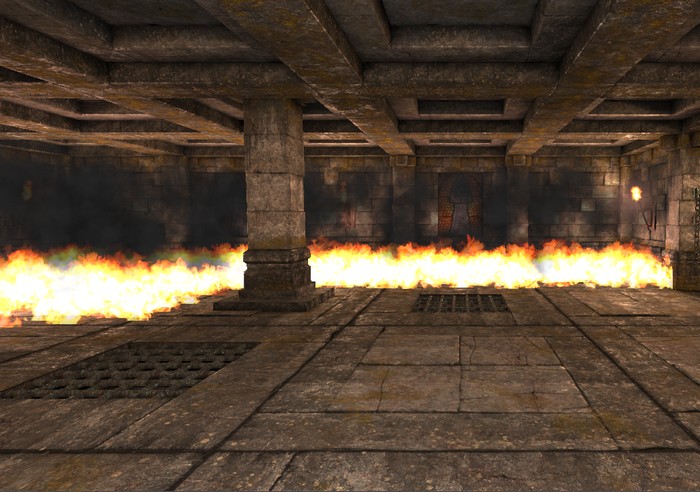 And like in the original game, you cant see items on the ground, you have to search blind in fire.

However it slows down the game a little bit (when used too much of the fields) but i think that is worth it.

Now I will try a little changed version placing right under the draining too see how it does look.

But thanks again it is 100% equal to the original Fire-Field of AP2.
This Mod will be so amzing, cant wait to see the completed Mod.

Edit: And here are the poisoncloud-drainages spreading out a dangerous greenlight comming out of the grating.
I think this looks pretty good 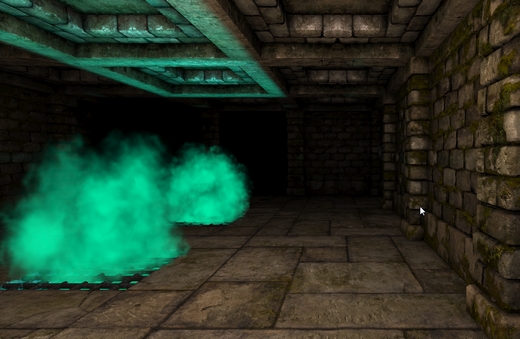 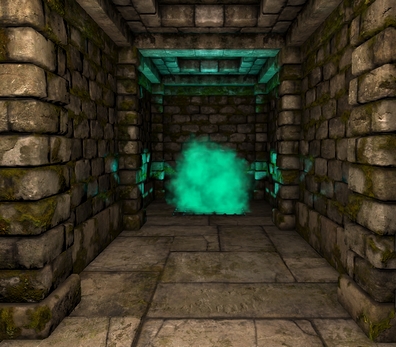 I will now try bringing little more movement (particle-effects) to the waterpool and maybe scaling the bottom of the pool so that it looks more that the party stands in the pool. Because the bottom of the draining is little to deep and this looks not very realistic...
My first LoG-Mod: Abandoned Places 2
Top

Placing too many particles effects in the same room will indeed slow it down a bit. However with my fire it seems that the light it emits is also a part of the slow down. To be used with moderation, however you may change the particle emission rate for a improvement in framerate. Also it's possible to have fire that does not cast light, the effect is still cool but it's less realistic.
The Lurker
Top

Fortunatly AP2 dont uses too much of the Flame effect at the same place AFAIK, but I noticed, that the poisoncloud coming out of The floor_drainage (even used light) dont slows down the game too much. Maybe I should reduce the flames also to the draining-surface and making it little smaler, I will test the best performance and then decide how I should use it best. But the Flames are great, looks good and the playfeeling is also ok when standing infront of flames.
My first LoG-Mod: Abandoned Places 2
Top
Post Reply
35 posts