We sneakily went past a very important milestone just a while ago. Legend of Grimrock 2 is now in alpha! The definition of milestones of course varies from one company to the next but I think our alpha is, relatively speaking, a “strong alpha” (since we don’t have any publishers or investors who we have to deliver to to get money for progressing in development, we can use terms that are actually useful and descriptive 😉 ). Alpha in our case means that the game can be completely played from beginning to the very end and that all the planned features exist. The last missing piece from the alpha we had was the ending of the game but now that we got that done, the deal is sealed. 🙂 Of course at alpha, there are still features and content that lack polish and refinement, and balance and progression of the game is not complete, but in a sense the game is now “whole”! To celebrate the milestone, we have a new screenshot for you… The herders are back! 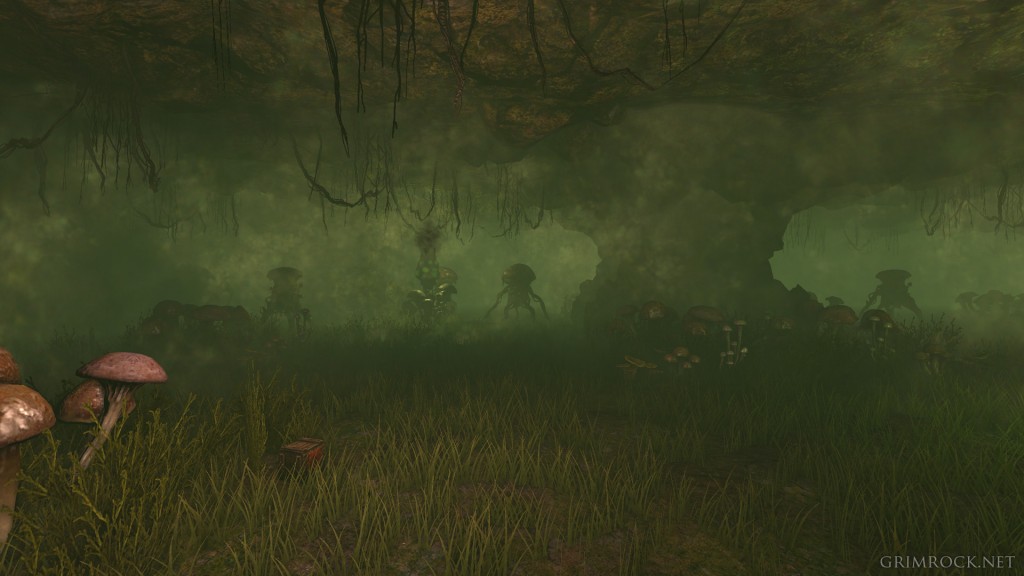 And like the natural order of things typically is, after alpha comes beta and that’s where we’re heading next! To get there, me and Petri have been doing a systematic polishing round for all the levels. Or maybe I should be talking about “areas” instead since each area that we tackle contains, technically speaking, 1-4 levels of varying sizes. Each day we pick one area of the game that we concentrate on and for the duration of the day we work only in improving that one place. Basically what we do is that we fix the biggest issues that arise from playing the level but we don’t limit ourselves on only improving the levels themselves (like the level layout, monster placement, puzzles, items and secrets) but we also work on game design issues (for example underwater gameplay, herbs and potions), visuals (lighting & atmosphere, particles, items & environment objects), audio (ambient & environment sounds, monster sounds) or even the game interface (automap and such) if need be.

One day for each area is not a lot of time but doing a pass like this over the whole game really improves the overall experience since this way we always tackle the weakest spots of the game without getting stuck into details for too long. This also helps us by breaking down the game into more digestible bits that we can focus on since trying to polish the whole game at once feels like an overwhelming task and it would always be difficult to decide what would be important to do next.

Oh and if you want more details on the progress of the development, Petri often tweets about things he’s been working on with the game.