Information about Grimrock 2 has been a little scarce lately so it’s about time we unravel some of the mysteries. Let’s get going!

The events of Legend of Grimrock 2 will happen on the Isle of Nex, a secluded island faraway from civilization. An island is a perfect place to setup an unforgettable dungeon crawling experience because we can mix indoor and outdoor locations seamlessly while still maintaining that atmosphere of mystery and danger, and the density of interesting things that is at the heart of Grimrock. If you think about it, the island is the perfect microcosm, where the party may explore dark woods, misty swamps, underground tunnels and ancient ruins without need to travel great distances. For us, an island is the perfect “dungeon” with a welcome variety of different types of environments.

At the start of the game, a party of four prisoners has ended up on the island against their will and start to explore the island. Pretty soon they will realize that they are not alone on the island and that the island is not an ordinary island at all… What are the mysterious towers on the island and who built them? Why is the island full of puzzles and traps? The story of Grimrock 2 will not be a direct continuum to Grimrock 1, but will be a completely new story with new characters that will expand the Grimrock universe.

A big part of Grimrock is, of course, the brain-teasing puzzles and for Grimrock 2 we have been busy developing new types of puzzle mechanics. Talking about puzzles is a tricky subject to discuss. We believe that the less you know about them in advance the better. So without ruining the surprises ahead, let’s just say that you’re not the only one stuck in the puzzles…

One of the few things some reviewers criticized about Grimrock 1 was monster behavior in combat. We have attacked this problem directly and rewritten the monster AI entirely. As a result monsters are now smarter and they know how to use their larger numbers to their advantage. The repertoire of tricks they know has been expanded greatly. For example, some monsters can call other monsters for help and can use group tactics against you. Of course the behavior of monsters depends on their intelligence so the most stupid and most fierce monsters are still, well, fierce and stupid as they should be. And talking of monsters, there will be lots of new monsters with some of the old, familiar faces making an occasional appearance for old times sake.

As explained in an earlier blog post , the character skill system has been completely redesigned and replaced with a perk-buy system that allows for more flexible character skill development. The design goal is make each level up meaningful and at the same time contain a tough choice. At level up, each character gains only one perk that changes the character in some way. Every perk gained is important. There are no in-between levels.

Tied to the skill system is the item system, which has also been expanded. Many items now have secondary powers that can be triggered by holding down the right mouse button on the action icon. The powers consume energy and range from special attacks to non-combat actions. In contrast to Grimrock 1, primary actions of items can be most often used by any character but the true powers can be used by a character with the right skills. 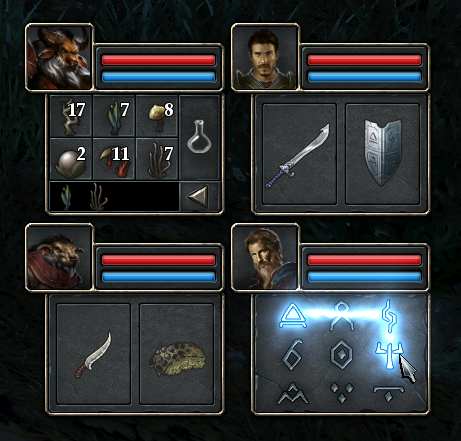 Potions can now be mixed directly in hand without going to inventory.
Spells can be cast using mouse gestures with less mouse clicks.

The new spellcasting panel allows mouse gestures to be used to cast spells. Spells are cast by holding the mouse button down while doing a swipe with the mouse on the correct sequence of runes. Talking of magic, the Mage character class has also been redesigned. The requirements to cast spells of different schools have been relaxed so that mages can cast larger variety of spells. In Grimrock 2, mages need not be one trick ponies.

Of course, Grimrock 2 also has new spells, a new playable race (with portraits to go) and a new character class. These combined with over a hundred new items, 22 new monsters, new environments, day to night cycle, plus as much more as we have time to crank in, means a lot of new stuff to have fun with!

In other news, we also have a big reason to celebrate today. Legend of Grimrock: The Series from Wayside Creations, the makers of Fallout: Nuka Break, has just been successfully funded on Kickstarter! WOOHOO! Wayside did a fantastic job with Fallout so we are super excited to see how Grimrock will translate to the new medium. Naturally we will assist Wayside and make sure the series will be true to the lore of Grimrock. There are still 4 days remaining on the Kickstarter, so if you want to take part in the development of the live series, there’s still time!

This post is getting rather long already, so let’s stop now to oogle at these shiny new screenshots! 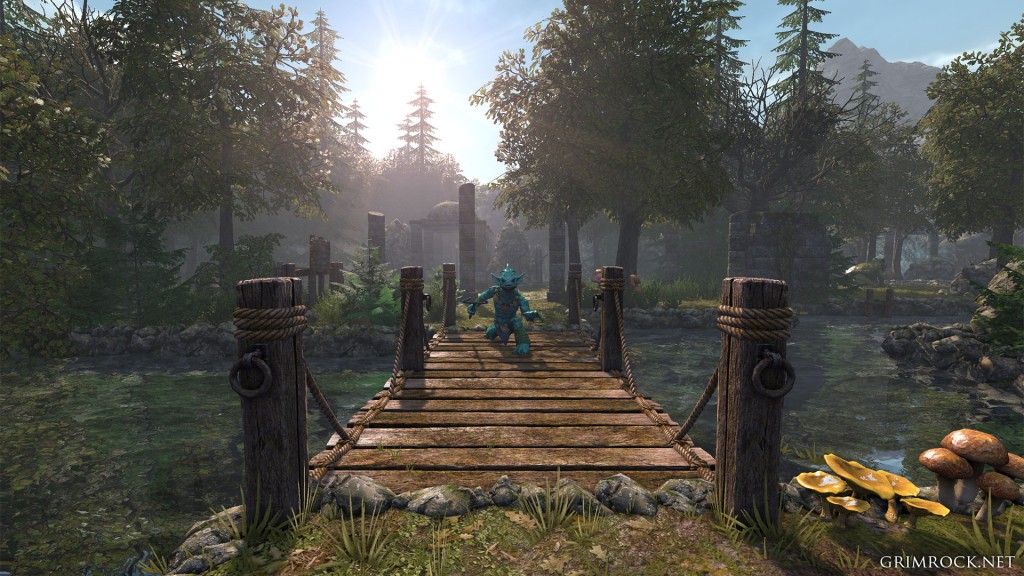 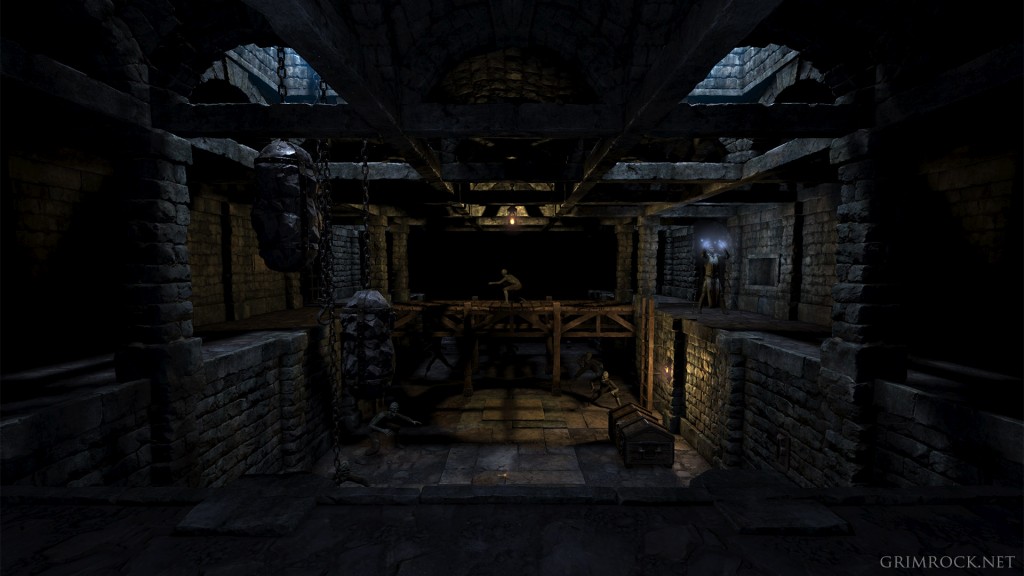 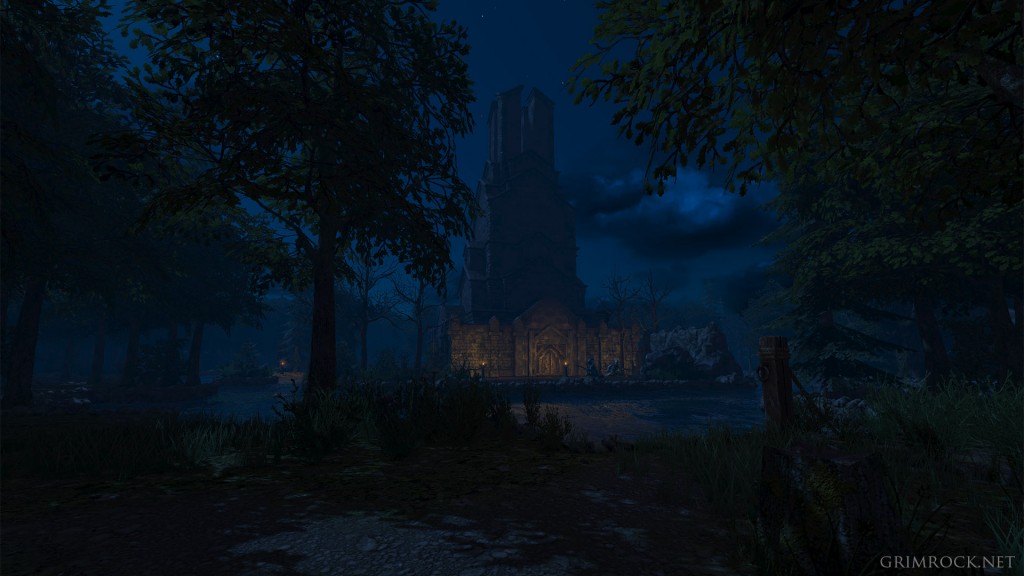 24 responses to “New screenshots and a list of features!”