Hi guys! Apologies for the lack of blog post lately. We have been to work for a couple of weeks already but the work has been somewhat uneventful as we have been chugging along with the editor so there has not been much to talk about. But a time for an update is certainly overdue, so let’s go through what has and is happening at the office.

Firstly, we now have proper dev rigs, yippee! 😀 Grimrock was mostly developed on PCs built from scrap parts that we scavenged from here and there, mostly from our former employers (thanks guys!). Luckily we had only a few issues with the old PCs like blown PSUs and such. It certainly makes a big difference having silent and powerful PCs to work with. I opted for a big SSD drive and a 30″ monitor so C++ compile times are hugely improved and I can finally fit the source code window and the game on the screen without overlapping. Also, it’s time to retire our trusty old file server which is so full of Grimrock assets that it’s at its breaking point. Small things like these can really make a difference to development efficiency. And of course this is all possible thanks to everybody who bought the game. Humble bow to you all!

After finishing a big project it’s always a good time to look at what has been accomplished and think about the future, and a big chunk of our time for the past weeks has been invested precisely into this. The success of Grimrock has really blown our socks away, but it also has enabled us, for the first time, to sit down and think through our options instead of just rushing madly forward with the project in the hope of finishing before cash runs out. During this time we also received some very interesting and tempting offers about other game projects (we can’t talk about the details as they’re covered by NDAs). It took us some time to evaluate these but in the end we realized that building our own games is the reason why we are here and the success of Grimrock tells us that it is a good reason. So we’re committed to keep working on Grimrock and see where that road leads us. The exact form, whether it be an expansion, a full blown sequel or even something completely different, is still undecided. Frankly, we were a bit exhausted with the whole concept of grid-based games after working so intensely for a year but as some time has passed we now think that we have more to give to this genre.

But first things first! The editor is still work in progress and it is starting to shape up well. We are almost in alpha stage now which means that we are just a few features short of being able to build Grimrock level dungeons with it. Please note that alpha is going to be an internal milestone for us and we are not going to do public testing on it, so no need to send applications for testing at this point, thank you! 🙂 As always you can follow the progress of the editor here. Oh and stay tuned for an upcoming video preview showcasing the editor!

With the editor our goal was to make it easy to use but at the same time offer advanced features such as scripting for puzzles. Initially the idea was to implement all kinds of interaction and logic with the Lua programming language. This line of thinking comes from the fact that all levels in Grimrock were coded in Lua, and we had no editors other than a text editor. Using Lua offered tremendous flexibility but for example placement of objects required entering map coordinates manually in to the code. After discussions in the forum and after having some time to think about this, we have now changed our minds and we have implemented a form of simple “visual scripting” in the editor. The dungeon designer can now connect actuators such as buttons, pressure plates and levers to doors, pits and other types of entities without writing a single line of Lua script. Of course this form of scripting has limitations because the designer is ultimately limited to the building blocks provided by the editor. That’s why we still have Lua scripting support that can be used to implement more advanced puzzles.

What else is happening? Since the editor is mostly occupying my time, Olli, Juho and Antti have had time to do some preproduction for a new Grimrock related project. As explained above it’s still undecided what this project is going to be, but some parameters are certain: we need more monsters and new environments, so that’s what the guys have been up to. We already have a new themed wallset and two fearsome monsters in the pipeline. Personally I can’t wait to get my hands dirty coding special features for the new assets and fighting those new beasts! It’s going to be awesome! 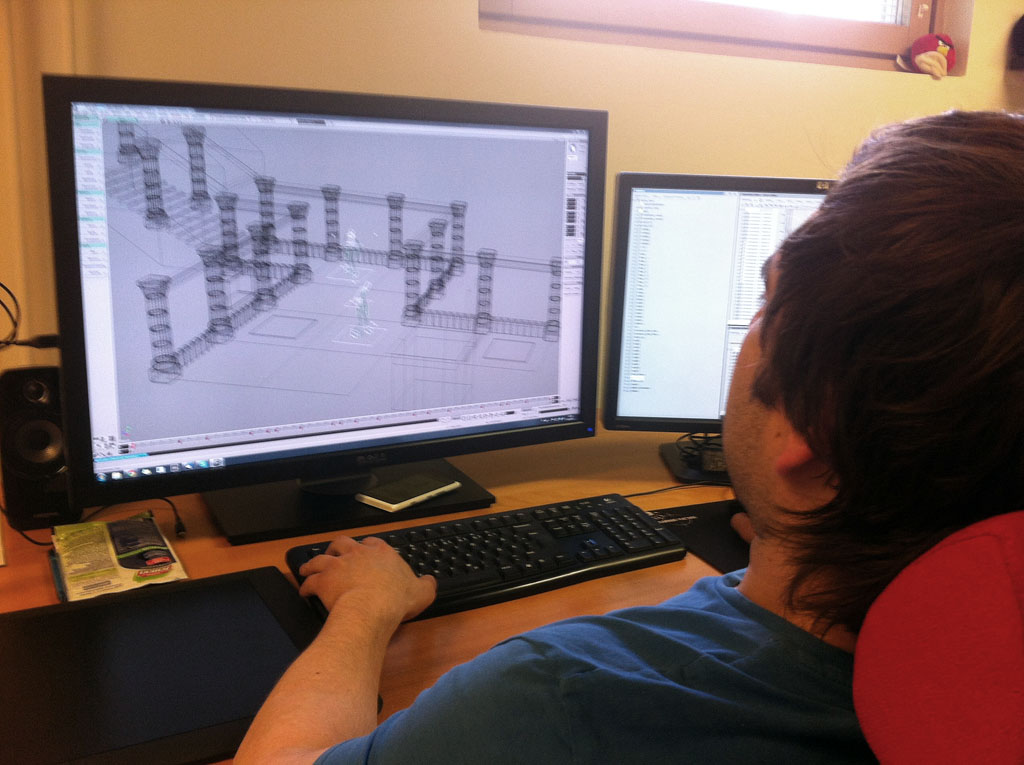 Olli rigging something we can't talk about yet in Softimage

159 responses to “Update and Future Plans”