Every CRPG needs champions and Legend of Grimrock is definitely not an exception: instead of just one player character, you control a party of four prisoners trying to escape the vast labyrinth of tunnels built into Mt. Grimrock, a ruthless, desolate and impossibly high spire of a mountain where criminals are committed to exile until they either perish or prove by escaping to be innocent of their crimes. Needless to say, no-one has ever survived and escaped from Grimrock.

We’re planning to create a bunch of interesting characters for you to choose from, each with their own specialities and quirks. For experienced players the selection of a good mix of characters is itself part of the gameplay. We’re going to extend the character roster gradually while developing the game and we thought it was time to introduce a few of them, so say hi to our first four prisoners! 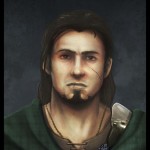 Contar Stoneskull, a legendary fighter from the North Reaches and a child of the nature, his skill with the sword is only surpassed with his compassion towards the poor and unfortunate. He got his name after a mud golem smashed his war helmet into shards with an earth shattering blow. Maybe the gods were with him that day, or he was just exceptionally lucky (Contar is not a particularly religious man) but he survived that day. He is traveling the lands with his wife who is also an adventurer. Contar has high strength and dexterity ratings but he’s not that suitable for spell-casting classes.

Yennica Whitefeather, Contar’s wife, is also a skilled fighter, but instead of relying on pure strength like Contar she favors bows and lighter blades. Yennica’s family is wealthy and well respected and she’s actually a member of noble house Valindor which she tries to desperately conceal. Her family despises her after she ran away and got secretly married with the love of her life, Contar whom her dad sees as a filthy barbarian. Because of this Yennica is ashamed of her family and would like to leave that part of her life behind her. Though Yennica never admits it she’s more intelligent than Contar (and therefore more eligible at magic if she ever chooses to learn the Art) and more dexterious which is advantageous with rogue skills. 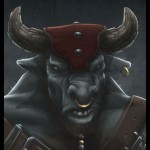 Mork is an eight feet tall Minotaur from far away Namaer, land of endless plains to the south. Mork hardly ever speaks because he, like other minotaurs, think its better to make his actions speak for himself. Mork is not really his real name, actually Minotaurs do not refer to each other by names, but his human companions call him Mork and he doesn’t mind. His friends sometimes joke in hushed tones but in good spirit about the name resembling ‘Dork’ but they never dare say it to his face because Minotaurs are known for their temper and sudden blasts of rage. Mork has an incredibly high strength rating so he does more damage with his fists than a normal man with a sword, but magic is completely out of his comprehension. 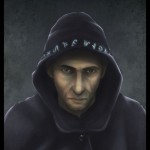 Sancsaron the Wry is a dropout from mage academy of Des because of violent behavior and a devastating incident that caused the death of two young apprentices. He is a dark spirit who cares more for his tomes and scrolls than his so called friends. He dreams of a day when he’s powerful enough to rely on his craft alone. Until that day he has got to act civilized and pretend to be nice so he can use his friends as meat shields. His true purpose in traveling the lands is to find the fabled Orb of Zhandul which is rumored to hold almost limitless god-like magical powers.

146 responses to “Meet the Prisoners!”